Everyone loved ladybugs as a child.  We picked them up; we counted their spots, and we may have even brought them inside.  The cute, round bugs are ubiquitous on children's books and clothes.  Ladybugs are some of our earliest friends, so it's surprising to find a pest dressed up like our little pals.

The Mexican bean beetle looks like a ladybug that has rolled in the dust.  It's coppery-brown but still covered in spots and half-dome-shaped.  These beetles are true ladybugs, and they are classified in the ladybug family, the Coccinellidae, which is a subset of the beetle order, the Coleoptera.  All my entomologist readers just cringed a bit after reading that last sentence (sorry!), since ladybugs are not actually bugs.  Entolomogists call them ladybird beetles.  I still use the term ladybug, because that's what I learned when I was 4 years old.  True bugs are in a different group of insects, Order Hemiptera, that includes stink bugs, aphids, leafhoppers and cicadas, but definitely not beetles.

Unlike almost all the other types of ladybugs, Mexican bean beetles are damaging to crops.  Ladybugs are generally famous for their ability to eat vast quantities of aphids and other pest insects.  But Mexican bean beetles are infamous for their herbivorous appetites.  The adult beetles are only moderate consumers of bean leaves, but after they lay their eggs, the larvae which emerge are voracious and insatiable.  Right now the larvae are out in full force.  Their little spiky orange bodies look like tiny Pokemon characters covering the bottoms of the leaves.  Every few days, as they grow, they slip out of their skin and leave it behind to grow a new one.  After a few weeks, they shed their skin and emerge as adult beetles.  Here is a spiky Mexican beetle larva along with some major leaf damage: 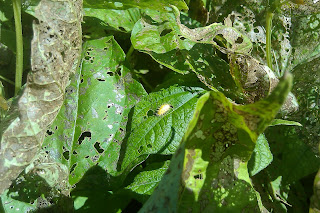 The Mexican bean beetle is currently helping itself to the snap beans on the farm, and it seems to show a slight preference for one of the two varieties we have.  They technically will eat any kind of bean plant, but snap beans and lima beans are their favorites.  Many of this season's bean plants have been reduced to lacy brown ghosts of themselves.  The plants are still are squeezing out a few green beans, but these poor plants are stressed to the max by their little inhabitants.

There are many strategies to dealing with Mexican bean beetles on an organic farm.  One strategy is to time the bean crops to minimize damage.  The beetles emerge every year around mid June.  They have overwintered as adults, hiding in warmer places or under debris, and the first adults to emerge are especially drawn to bean plants to lay eggs.  If you plant your bean crop early, you can harvest beans before the scourge begins.  Also, you can wait until the first round of adults emerges and flies somewhere else to look for beans and then plant your crop.  It is thought that eliminating probable overwintering locations can be helpful.  Beans in infested areas should be harvested quickly before the beetles can damage them. In addition, the larvae are susceptible to insecticidal soaps, which disrupts their cuticles and they desiccate.

The farmer I work for is using a neat but gruesome approach to eliminating the Mexican bean beetles.  She and her son ordered wasps through the mail and released them into the bean field.  These wasps lay their eggs on Mexican bean beetle larvae.  The wasp eggs grow inside the larvae, eating its flesh, and then they emerge from the larvae as adult wasps that go on to lay their eggs on other unsuspecting beetle larvae.  As you might suspect, the larvae do not survive this process!  The parasitized larvae enlarge and turn orange-ish.  At this stage, they are referred to as mummies.  Here is a picture of a bean leaf with both yellow larvae and orange mummies: 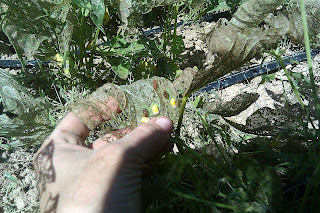 The wasps' life cycles repeat in quick succession, and soon the larvae should be mostly mummified.  The bean plants will hopefully recover - even now, their newer growth looks healthy and robust.  Soon I'll be able to stop looking at every ladybug with a suspicious eye.

Here is your reward for making it to the end of this post:  All members of the ladybug family can secrete a noxious compound from their knee joints when they are irritated.  The compound is subtle to our noses, but you can smell it if you bother a ladybug and sniff its knees.  The scent from Mexican bean beetles is a little stronger.  This secretion is a deterrent to predators, who find it distasteful.
Posted by Lorna Morris at 5:20 PM