I am the only person in the world who seems to have trouble growing zucchini.  They are notoriously generous in fruit, and you always here gardeners joke about being overwhelmed by their zucchini crops. There are even stories about gardeners secretly dropping of baskets of zucchinis at their neighbors' houses just to get rid of them.

I've gotten better at growing zucchini plants through the years, but still have little luck with the actual fruits.  (Yes, they're fruits, according to the botanical definition.  Any plant part that contains seeds is a fruit.  Don't worry - I call them vegetables when I'm cooking.)  My home garden has a lot of shade for a garden, and my first few years of planting zucchini in the shadier regions allowed the plants to be overcome by a dusty white mildew.  Any zucchinis would wither and rot before they grew two inches.  Now my plant is in the sunniest patch I have, and it's healthy, but my zucchinis are still withering prematurely.  Here is this year's zucchini plant, recovered from the hail damage: 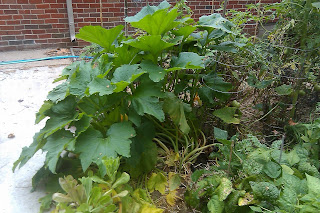 After talking with the farm owner where I'm working this summer, we agreed it might be a pollination problem.  Pollination is how plants reproduce, and seeds and fruits are the offspring of plant reproduction.  Pollen, is the plant equivalent of sperm, and it must reach the botanical equivalent of eggs, called ovules, for seeds and fruits to develop.  There seem to be two possible pollination problems in my case:  maybe there aren't enough bees to pollinate the flowers; or maybe there must be two plants for successful pollination.

Option 1, not having enough bees, is a distinct possibility.  There aren't many bees in my neighborhood.  I do see bumble bees, but they tend to cluster out front where all my ornamental flowers are.  I have seen no honey bees this year, which I fear is due to colony collapse disorder - see a future post on this.  To remedy this problem, I could plant some bee-attracting plants near my zucchinis so there is more of a reason for the bees to fly all the way over there.  I could also start a honeybee hive in my back yard, which I will do some day if my neighbors aren't reading this blog.  Or, I could hand-pollinate the flowers when they open every morning, which is what I have been trying.

To hand-pollinate the flowers, you must understand a little about the reproductive organs of zucchini plants.  Flowers are always reproductive organs for plants, but each type of plant is a little different.  Zucchinis and all squash-type plants produce separate male and female flowers.  Most types of plants have male and female in the same flower, but some may have entirely separate male plants with only male flowers and also female plants.  Hollies have separate genders, which is why only some hollies grow berries - only females can grow fruits and only males can produce pollen.

On zucchinis, the female flowers grow out of what looks like tiny immature zucchinis.  This organ is the female flower's ovary, and it is filled with ovules.  The ovary will one day actually become a zucchini, and the ovules will become seeds after the flower is pollinated.  Notice the thick regions behind the female flowers below - they are ovaries. 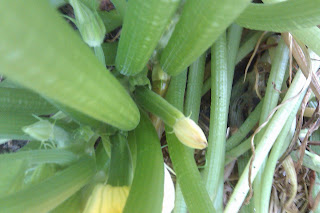 Male flowers have a normal stalk, and inside the male flowers are pollen-producing organs called anthers.  Here is a male flower: 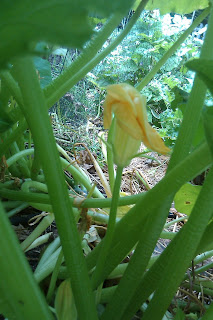 For pollination to occur, the pollen must be transferred to sticky pads, called stigmas, inside the female flower.  Each pollen grain then produces two actual sperm cells that burrow down through the flower to an ovule and fertilize it.  Many pollen grains are needed to fertilize all those ovules inside a zucchini ovary.  When the ovules are fertilized, the fruit begins to enlarge and grow into a mature zucchini with mature seeds.  If no pollen is transferred, or only a little is transferred, there is no signal to the plant to grow the fruit, and the ovary just withers and rots like mine have been doing.

I have been hand-pollinating for a couple of days now, by touching my finger to the anthers in the male flowers and smearing the pollen on the female flowers.  I think it may have worked!  Here you see the stigmas inside of a female flower and what I think may grow into an actual zucchini: 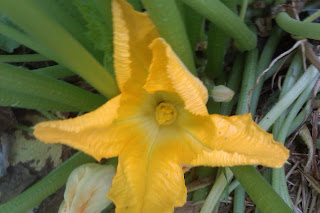 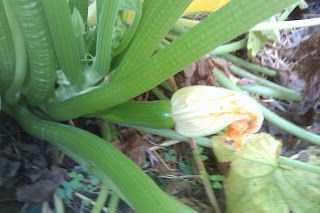 Regarding the second possible pollination problem, I may have to plant two zucchini plants next year.  Since I only have one zucchini plant, the pollen I used came from the same parent plant as the flower I transferred it to.  Some plants don't mind reproducing with themselves, but zucchinis may be somewhat pickier.  The zucchini that seems to be growing could have been pollinated by pollen from a neighbors plant.

On the farm, the year they had a bee hive, the squashes were much more productive, since all their flowers were being pollinated.  It really makes you appreciate the bees more when they are not there to do that garden task for us.
Posted by Lorna Morris at 9:49 AM