My favorite game to play with idle high school students was Stupid Ninja.  In Stupid Ninja, players each perform ninja moves, and the top move is always 'Mantis' because mantises are sooo bad (by which I mean fierce - high school terminology here).

Praying mantises are the voracious tigers of the bug world.  They are crafty, patient hunters that stalk their prey then pounce and chew.  They will hunt and eat anything they can catch - mostly other insects, but also birds and even reptiles, depending on the relative sizes of the parties involved.  They are indiscriminate carnivores, even eating their own siblings soon after hatching.  Their copulatory cannibalism behavior was a source of endless questions and freak-outs by my students.  One well-informed student:  "The female eats the male after mating!!!"......Everyone else in chorus:"Ewwwwwwwwwwwww!!!!!!"

There are a couple of going hypotheses to explain this infamous afterglow routine.  Some say that the female will be more tolerant of mating behavior by the male if she is to get a meal out of the deal.  For smaller males who cannot escape or battle competitors, this may be the price of passing on their genes.  It's the mantis version of the fancy dinner date with expectations, I suppose.  Others point out that a female who is well-nourished will be able to produce better eggs and egg-cases, thus helping to ensure the offspring of the sacrificed male.

Mantises are very useful bugs on the farm.  Predators in general help keep numbers of prey organisms lower.  The presence of predator insects help keep all the other insects in check.  They are part of this balanced ecosystem.  One aspect of Optimal Foraging Theory says that generalist predators tend to hunt for the most common species they encounter as their preferred prey species.  At any given time on a farm, the most common insect species is likely to be a crop pest, therefore predatory insects are always good to have around.

The farm owner and her 9-year-old son are delighted to welcome this year's group of bright green mantises to their farm.  They saved egg cases and shepherded the little hatchlings into their fields.  The son can easily find them upon request, which is quite impressive to me, since my much older students were unable to collect them for their insect collections for the past couple of years.  Mantises are known for their camouflage, so they can be tricky to find even when they are abundant unless you have spent enough time outside to be able to really notice what lives around you.

The egg cases are strange clumps of tough dried mucus filled with eggs.  Mantises overwinter as eggs inside the egg cases, and baby mantids hatch out in the spring.  They grow all summer long, and mate and lay eggs (or get eaten) by the end of summer.

You can go on a mini-safari if mantises are around.  Bring a camera, wear long pants, and sit in the weeds near a praying mantis.  They love to sit under flowers, since flowers attract flying food.  Be patient and watch carefully with your camera poised - he hunt is already on.  The mantis will sit and wait for its prey.  Then, when something buzzing comes near, the mantis will ambush in a flash.  One moment there will be two insects, and the next there will be only a mantis holding its lunch and chewing happily.  It's thrilling and slightly scary to watch, and you will learn some bad Stupid Ninja moves.

Here's a young adult mantis hiding in the seedlings: 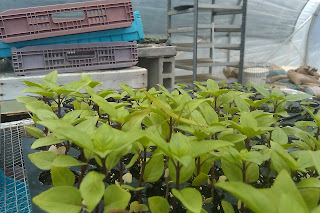