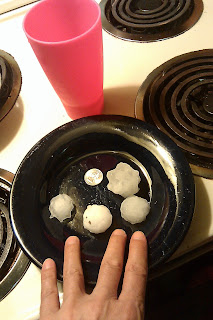 What you see here is not only my first picture posted to this blog but also the largest hail I have ever seen.  It fell on my house, and it is officially called, "golf ball-sized hail".  The coin in the picture is a quarter.  The house is fine.  The car has a little cellulite now.  The garden is licking a few wounds, but really OK.

This rather charismatic weather event got me thinking more about weather on the farm.  A co-worker on the farm remarked that she would not like do farming as her primary profession because she didn't want her job to be at the mercy of the weather.  While all are livelihoods are linked to weather at some level (try doing any work in a tornado), she clearly has a point.  Great weather means healthy, productive crops, which in turn means income.  Drought, hail, flood, tornado and hurricane are the dreaded words that mean an entire season's income could be down the drain (or evaporated, as the case may be).  Farmers can buy crop insurance for these unpredictable events, but it is only a safety net, not a satisfying season's income.

Fortune has smiled on the farm this spring, with ample rain, early warmth to start the crops, later cool to work in and no hail or tornadoes.  The crops are growing as fast as the weeds.  The hail that fell on my house thirty miles away would have been disastrous for the farm.  It would have destroyed all the greens (chard, kale and lettuce) and would have seriously stunted the ornamental flowers and tomatoes.  The leaves would have been shot through with holes, like those on the leaves of my zucchini plant at home.  The tomatoes would have been dented badly, with bruises that rot in a day or two.

Hail is a very poorly understood weather phenomenon, but it has a lot in common with tornadoes, which are well-known here in Nashville.  Conditions that create tornadoes are also likely to create hail - the clouds pile high (cumulonimbus clouds), often with thunder and lightning, ominous winds, massive rain and a greenish tint to the sky.

Hail and tornadoes tend to occur on the leading edge of a thunderhead as it enters the area.  A cumulonimbus cloud indicates a tall pile of cool to cold air over an area of warmer air.  Think about it - it's summer and you're standing outside in the heat.  Next a thundercloud comes up and does it's thing.  After the storm, the air that has moved in with the storm is cooler.  A big mixing of air has occurred, usually squeezing the water out of the air as some form of precipitation.  When the temperature difference is larger, for example when it's hot on the ground and freezing in the cloud, the air mixes very fast (tornado), and the precipitation freezes (hail).  If it's cold on at ground level, for example in winter, hail doesn't form because the water in the air doesn't form liquid water droplets that can freeze into solid balls, instead water molecules in the air collide and grow onto crystals of water, forming snow.  We will all probably become more familiar with this process as the Earth warms, since climate change is increasing the severity of storms.

The strangest thing about precipitation of any form is that it doesn't just automatically fall out of the air when it forms.  We all know that water or ice are denser than air, so they fall to the earth when we drop them.  But they don't fall when there are updrafts blowing them higher up in the clouds or when they are so small they are pulled more strongly by the air molecules than by gravity.  A cumulonimbus cloud is tall because it has updrafts.  If it has updrafts and downdrafts and is very, very cold, a piece of hail can form and grow on the updraft, fall and melt a little, blow back up and grow, etc. until it grows to the size of a dime, a golf ball, or even a grapefruit.  Next time it hails golf balls near you, observe the hail balls and you will probably see layers from the hail freezing differently as it rises and falls in the clouds.  You will probably also notice that the hail is irregular in shape due to multiple hail pieces freezing together somewhere above your head.

Today is the first day of summer.  Precipitation will be less predictable for  the next few months.  I know I'll be paying a lot more attention to the weather than I normally do - you can't help it when you grow plants outside.  Even without checking the rain gauge, you notice the dampness of the soil, the color of the ground, the turbidity of the leaves and stems and the dustiness of the air.  With a little luck, it'll be a good crop.
Posted by Lorna Morris at 10:14 PM