Life has a way of taking over here on Earth.  Any surface without living things on it will eventually have life growing on it if you wait around long enough.  A new sidewalk of poured cement will have plants growing through cracks after twenty years.  New roofs will eventually become soft and covered with mold, moss and even plants.  Fresh lava from a volcanic eruption will cool, harden and in several decades be covered by a forest (Neat example here).  The invasion and growth of life on nonliving surfaces is called succession, and it's happening right here in our classroom.


The nonliving surfaces we have at the classroom are mostly the rocks.  The big boulders and the flat rocks around the pond are too recently dug from the ground to have life on them yet, but they probably will by the time you graduate from high school.  The rocks with the waterfall behind the pond and the rocks that make up the wall at the back of the classroom have been exposed at the Earth's surface for long enough to have some neat life growing on them.

Organisms that can colonize bare rock are called pioneer species.  Lichens are usually the first pioneer species, and they look like color splotches on the surface of rocks - white, green, grey, yellow or even orange.  Lichens are actually two organisms for the price of one: a fungus and an alga living together.  The fungus and alga form a mutualism - an interaction where both organisms benefit.  If you remember from the beginning of the year, algae grow in our pond - algae can only live where they don't dry out.  In lichens, they live surrounded by cells of fungus so they can live outside of a pond.  In return for this good protection, the algae provide the fungus with food from doing photosynthesis.  Together, the organisms that form lichens make acids that slowly dissolve the rock on which they grow, which makes tiny crevices in the rocks.
Once lichens have been growing on rocks for a while, mosses are able to survive there too.  Mosses are plants that don't have flowers or stems or roots - just tiny green leaf-like structures and microscopic hair-like structures.  Mosses send their hair-like structures into the crevices the lichens made in order to anchor themselves on the rock.  Then the mosses grow bigger.  They die back during harsh weather and grow more in good weather.  As they die back, their dead parts decompose in place, and they turn into a tiny bit of soil.  After several years, mosses build up enough soil underneath themselves that other plants can move in.  Mosses can also start to grow in cracks and pockets in rocks. 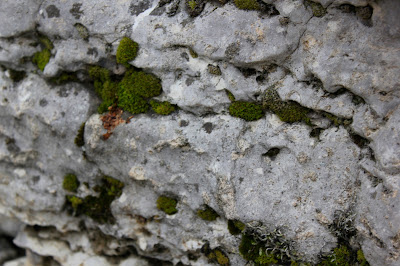 Just as mosses build habitat for small flowering plants, the flowering plants provide habitat and food for more creatures.  Flowering plants have roots that hold the soil in place, and they also add to the soil as they die back each winter and decompose.  Mosses and plants can host tiny insects, adding to the variety of life growing on a formerly bare rock.  As the years go on, the soil builds and builds and larger plants, shrubs and eventually trees can grow on what was once bare ground.  Eventually a mature forest might be found where once there was bare rock, and succession has been a success.
Next time you are near an older neighborhood or a vacant lot in Nashville, see if you can recognize succession.  Old houses have mossy roofs.  Ancient stone walls are covered in plants with trees growing through them and lizards living between the stones and roots.  Old parking lots or yards are infiltrated with weeds and dotted with butterflies drinking from the weeds' flowers.  You can see the results of succession at the River Campus too.  Most of what is now the wetland used to be an open farm field with only grass - only 15 years ago!  Now it has grown into a young forested wetland with lots of plants and small trees.  Life certainly does take over!