These rocks need names.  Each of the big limestone boulders in the circle in our outdoor classroom has something unique to offer the curious eye.  I'm sure by now most students have decided which rock is their favorite to sit on when they visit the outdoor classroom.  For now, I'll number the rocks 1-8, but hopefully students will come up with actual names for them.
If you follow the main path into the circle, rock number one is on the left.  Then continue counting around the circle.  The fence is between 4 and 5.  Rocks 7 and 8 are the last ones, and they have been placed right next to each other.

Stand in the center of the circle and look around at the rocks.  What are the first things you see?  I see scrape marks, those lighter marks on the rocks where some serious equipment carried them from somewhere else in TN to here.  Next I notice that the rocks look layered.  These rocks are sedimentary rocks, formed over thousands of years as water dropped off layer after layer of tiny mineral particles (more below).

Let's take a look at a few specific rocks in more detail and see what they have to tell us.

Rock #1:
Most of the rock does not contain visible fossils, but there is a gigantic nautiloid fossil that is fairly easy to locate on the surface of the rock.  Hard structures of ancient creatures formed fossils easily, and nautiloids had hard, segmented structures that left fossils like the one to the right of my finger below.  Nautiloids were predators, and where there are predators, we know there has to be prey.  Nautiloids' prey organisms were soft-bodied, so they didn't tend to leave fossils.  The amount of rock that contains a nautiloid is small compared to the rest of the rock because nautiloids were fairly rare in their ecosystem. 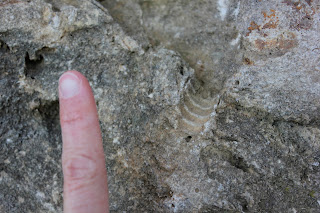 Rock # 2:
This rock has a fossil from an organism called a bryozoan.  Bryozoans are filter feeding animals that live in colonies.  They are much like corals, though they are not closely related to corals.  It's common for organisms to be similar and yet unrelated.  For example, penguins and dolphins have many similarities (shape, color, swimming style), yet they are very different types of organisms: penguins are birds and dolphins are mammals.  In the same way, bryozoans and corals are similar in shape and habit yet unrelated.  Bryozoans were much more common when these rocks were formed (300-500 million years ago!) than corals were, and there are several bryozoan fossils on our rocks.
Rock 3:
Find the crystal-lined hole in Rock 3.  You have found a geode-like structure.  Geodes can form in different ways, but it is likely that this one formed when part of the original sedimentary rock dissolved and washed away to leave a hole, or cavity.  Then over thousands of years, water seeped through the cavity.  Water usually has dissolved minerals in it, and sometimes those dissolved minerals crystallize into solid minerals.  If you have an older faucet at home, look for a whitish crust around it - the white crust is crystallized minerals from the water that is carried through the pipes.  I suppose if the conditions were right your faucet could be covered with pretty crystals in a few thousand years as more and more minerals are deposited on it.  The same process that makes the crust on your faucet made the geode you see in this rock.
Rock 7:
Rock 7 is my favorite for looking at the layers of sediment that formed the rock.  For some reason, this rock was placed on its side, so the layers are more easily visible.  Flowing water makes sedimentary rocks.  Fast-moving water picks up larger, sand-sized sediment and carries it until the water slows down.  Then the sediment falls out of the water and settles on the ground in a flat layer.  Slower-moving water picks up smaller particles, like the particles that make up mud.  When slow water stops moving, it drops its particles onto the ground.  If the speed of the water above the ground changes through the decades, the sediments that settle onto the ground will have different textures.  The darker, smoother bands in Rock 7 were formed from slow-moving water's particles.  The lighter, rougher bands were formed from faster water's particles.
There are lots more treasures to find on these rocks, so look carefully.  There are many more fossils, interesting rock layers, geode-like structures and other strange features.  I would like to thank Mr. Smail for teaching me about our rocks.  Feel free to email him if you have more Geology questions!