A Time to Sow

Seasons are changing already on the farm.  Crops are maturing, exhausting themselves and giving way to insects, and it's time to plow them under and start anew.  The chard, beets, onions and lettuce were past the point of diminishing returns, so last week we demolished them and and set up twelve new beds, which are already starting to grow.  We'll soon have new chard, beans, lettuce, beets, turnips and carrots.

To change over the beds, we remove the irrigation system (see below), and the farm owner plows the crops under.  Then I spread organic fertilizer on the row, and the farm owner plows again.  Maybe after a few more years I'll get to learn how to drive the tractor, but for now, I stick to raking the biggest of the dirt clods and weeds out after the plow goes through.  The beds are perfect at this point - fluffy, weed-free and ready to be planted.

There are two ways we plant new beds:  one is transplanting seedlings into the soil that have been started in the greenhouse, and the other method is directly planting seeds into the soil.  The method of planting depends on the type of plant.  Those with a long taproot, like carrots or beets must be direct-sowed, and others like squash or kale or most flowers can be started in the greenhouse and transplanted.  I started hundreds of seeds in the last few weeks for transplanting, but we won't get to those until next week.  Last week we were direct-sowing.

There is an ingenious little machine on the farm for direct-sowing.  It's called the Earth Way Precision Walk-Behind Garden Seeder.  Here is a picture of the whole machine and of the seed chamber filled with chard seeds: 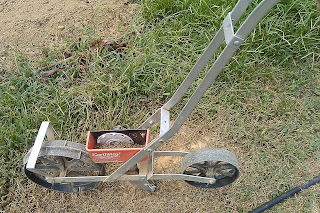 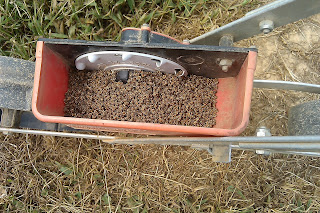 The front wheel has a groove for making a seed furrow.  The wheel inside the chamber scoops 1-2 seeds at a time, and you can easily replace the wheel with a different-sized chamber for different seeds.  The seeds fall down a chute into the furrow in the soil.  There is a chain dragging behind the chute for pulling the soil back in place.  The back wheel is flat for pressing the soil down over the seeds.  Genius!  It worked very well, too, except for the carrot seeds, which had a coating on them for supposedly making them easier to sow evenly.

We usually make 4 rows per bed.  Since this was my first time seeding, the rows were a little wonky.  I know they'll look a little strange as they start to sprout, but we won't notice the crookedness once the plants get big.

After we seed, we lay irrigation tape over the rows of seeds.  It has holes every twelve inches to drip water directly onto the soil.  Drip tape distributes water very efficiently, and it wastes much less than sprinklers.  The irrigation tape can be reused many times, though I learned the hard way that wound-up balls of used drip tape make great places for wasps to nest!  Fortunately, I wasn't stung, but many poor wasps lost their home.

Direct-sowing is quick and easy compared to transplanting, but there are some trade-offs.  First of all, the seeds are often planted too close together, and then they must be thinned.  Also, sometimes the direct-seeder malfunctions and entire swaths of the rows don't get planted, which you don't notice until the seeds sprout.  When growing seeds for transplanting, every seed usually germinates.  Expensive seeds aren't wasted, and every bit of the bed ends up with actual plants growing on it.

I seeded on Thursday and I don't go back to the farm until Tuesday.  There has been lots of rain and sunshine, so I bet the seeds are coming up.  Everything seems to grow to quickly on the farm.
Posted by Lorna Morris at 10:53 PM